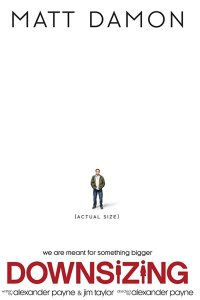 IDEA:  In the near future, a technology exists that gives humans the ability to shrink themselves down to five inches, allowing them to live luxuriously while reducing their carbon footprints. Unsurprisingly, the seemingly utopian idea has major pitfalls.

BLURB:  Downsizing exemplifies a kind of original, earnest social message movie currently in short supply in Hollywood, backed by an equally rare conceptual ambition. There is something admirable and refreshing about the unfussy directness of its appeals for altruism, civil responsibility, and environmental consciousness at a time when those things seem to matter more than ever, delivered through a compelling science-fiction scenario that sees hope in human endeavor even as it concedes that our destructive tendencies will, in all likelihood, decimate the planet and possibly the human race. If anything is disappointing about Payne’s film, it’s how ultimately attenuated his speculative (mini)world feels. Logistics and political nuances are more or less abandoned in favor of the film’s broad-strokes metaphor, which considers the wider implications of “downsizing” without really accounting for the operations of the universe in which it takes place. Perhaps inevitably, the myriad rich possibilities of the idea remain largely unexplored, reducing the film to a somewhat gauche tale of a (white, male) individual’s moral education, with an occasional adherence to archetypes that verges on the uncomfortable. Hong Chau at least assuages some of the sourness. Playing the film’s most complex and well-rounded character, the actress makes Ngoc Lan Tran a woman of vital, agential fortitude who resists categorization as either noble victim or enlightened redeemer, and she provides the film with a verisimilitude lacking in its more facile machinations. If it weren’t for her, Downsizing’s clarion call might’ve sounded more like a hollow echo.