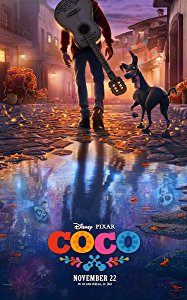 IDEA:  When Miguel is transported to the Land of the Dead after feeling stifled by his family's age-old ban on music, he sets out to find his musician great-great-grandfather and uncover the truth of his heritage.

BLURB:  Coco is so overflowing with heart, energy, ingenuity, and rich cultural detail manifested in dazzlingly intricate audiovisual detail, its scene-by-scene effects are intoxicating. Never mind that it hardly counts among the crispest or most elegant storytelling in the Pixar canon – the film achieves its formidable power through its deeply realized, tangible evocation of Mexican traditions expressed in a celebratory riot of color, music, and pathos. Coco feels like a homegrown product, not an American studio film appropriating cultural signifiers or exoticizing from an imperialist distance, and this makes all the difference. Its effulgent depiction of Día de los Muertos emphasizes not only the spectacular festivity of the holiday but its central importance as a cornerstone of ancestral memory, as an honor to loved ones who have died, but have not been lost. By embroidering song so pervasively into its genealogical journey, the film testifies to music as one of the preeminent channels for memory, along with the photographic arts that also so preoccupy the story. Coco adds the medium of animation to that mnemonic group. All of its myriad loving representations – quilted into a tapestry that unites folklore and 20th-century art with the narrative logic of telenovelas – blaze across opulently designed frames, their essences transmitted to us just as decorated ofrendas and musical heirlooms summon absent people and places. At a certain point, Coco’s overstuffed plot and compulsory heartstring-tugging begin to feel less like symptoms of a kids’-film formula and more like signs of a culture’s vibrant, uncontainable spirit.