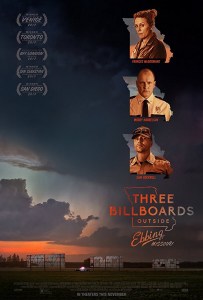 IDEA:  Exasperated by the local police force's failure to turn up the culprit in her daughter's rape and murder, an aggrieved mother rents out three billboards calling out the injustice and proceeds to take matters into her own hands.

BLURB:  There is an undeniable catharsis in watching a splenetic, vengeful Frances McDormand lob Molotov cocktails, both literally and figuratively, at the face of systemic injustice. Her Mildred is an avatar of social outrage boiling over into implacable bellicosity, and she functions as the unfiltered mouthpiece for a disaffection all too familiar to a contemporary American populace. Three Billboards outside Ebbing, Missouri is a channel for the righteous fury she epitomizes that is designed to both stoke and gratify audiences’ own anger about broken justice systems and critically assess the role of such anger in combating them. McDonagh’s irreverent and incendiary handling of the subject matter, however, makes it best suited for the former. The unapologetic coarseness of his dialogue, liberally peppered with epithets, simultaneously rabble-rouses and provides an outlet for so much pent-up frustration. We are thrilled by Mildred’s crusade because it enacts the reckoning with institutional corruption that doesn’t happen in real life; the noxiousness of the law enforcers she has to contend with exacerbates our desire to see her burn it all down. But McDonagh is also rightly (and none-too-subtly) arguing that fire should not be fought with fire, an important maxim to heed but perhaps a challenging one to embrace in the tinderbox of racial and sexual hostilities he’s conjured. Three Billboards etches a complicated moral terrain – decency seems to have atrophied across the board in Ebbing – but McDonagh’s predilection for glibness often makes the film more scabrous cartoon than incisive social study. Still, he delivers salient points about a volatile American climate, and satisfyingly allows strands of forgiveness and atonement to float up from the muck.