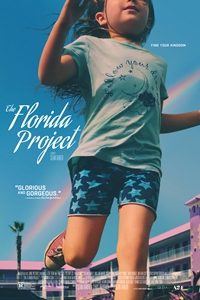 IDEA:  The escapades of Moonee, a six-year-old living at a budget motel on the outskirts of Orlando.

BLURB:  In The Florida Project's vibrant but dilapidated America, the Magic Castle is a cheap motel where the economically disenfranchised take up temporary residence, their livelihoods dependent on the same capitalist apparatus that keeps them in near perpetual destitution. Consumer culture materializes in a vast, meretricious, and inescapable landscape around them, whether it’s endless fields of commodity signs drenched in the Florida sun or infomercials that seem to play on repeat indoors, promising personal satisfaction always out of reach. Sean Baker’s film, a rollicking child’s-eye odyssey spun around a grim social realist portrait, is catalyzed by such tensions. It brashly illustrates an ecosystem where human relations are conditioned and strained by the imperatives of capitalism, where institutional strictures burden poor adults while latchkey children turn their crumbling environs into playgrounds. Layering perspectives in the effort to attune us to a milieu that can be at once fantastical, tawdry, and depleting, the film produces a dissonance that is compelling but ungainly. What Baker’s weaving of mischievous play and indigence has in empathy and verve it somewhat lacks in finesse; the antics, which tend to feel cloying and affected, don’t often sit well with the more nuanced social textures that later drown them out, Baker’s ebullient style frequently risking elegance for blunt impact. It is in that bluntness, however, that The Florida Project also sparks to such memorable life, allowing its most wrenching moments of desperation to transform into anthemic resilience, if only fleetingly.