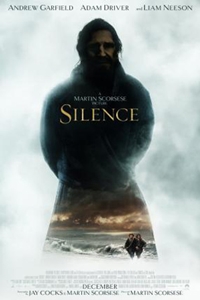 IDEA:  In the 17th century, two Jesuit priests travel to Japan to find their mentor, who is said to have assimilated and renounced Christianity.

BLURB:  Few, if any, films in Martin Scorsese’s oeuvre have felt as austere or intimate as Silence. Its 160 minutes are devoted not to operatic formal flourish or the generation of historical sweep, but to soul-sick rumination; rather than build outward in grand strokes across that runtime, it burrows deeper and more ceaselessly inward to a psyche beleaguered by a profound crisis of faith. Starkly, without superfluous adornment, Scorsese cuts right to the essence of his protagonist’s belief-shaking quandary, initiating a dialectic that constantly and in increasingly lacerating ways pits stubborn religious conviction against uncompromising national ideology. That both could be referring to either side in this loggerheads is what makes Silence such a compellingly ambivalent work. Our point of entry and identification, however, is Father Rodrigues and by extension Christianity. As played by Andrew Garfield, whose lithe features and soft-spoken demeanor make him an agreeable figure from the start, Rodrigues embodies passionate piety and intrepidness, as well as a naïveté masking imperialist fervor. We understand, even admire, his tenacity, and it is testament to Scorsese, co-writer Cocks, and Garfield that our relationship to him grows more agonized, not resistant, as the consequences of his actions grow more visibly destructive. He emerges as the latest in a long line of Scorsese antiheroes, inviting our simultaneous sympathy and disapproval. Both feelings are elicited by the Japanese characters, as well, and in the simmering morass of anger, righteousness, and repudiation they all share, Silence viscerally captures the internecine struggle of imperialism and the angst-ridden trials of inveterate religiosity. This may not be the most immaculate of Scorsese’s films, but in its bluntness and relative minimalism, it feels like his most personally sobering.