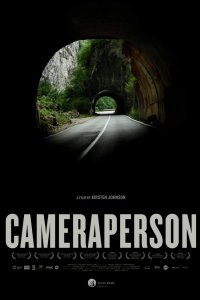 BLURB:  Without being precious or overly academic about it, Cameraperson demonstrates the transcendent body- and mind-expanding functions of the cinematographic camera apparatus. It’s right there in the title: for Johnson as it is for the spectator, the camera conflates with the individual, becoming an annex organ that has the capacity to enact and fulfill innate human needs. The humanist core that blossoms through the film’s measured formality attests to this central truth. Johnson gets us to reify how the apparatus gratifies our passion for perceiving; the ways in which it orients us in the world through mediation and identification; how it sparks our consciousnesses and consciences to make us agents of social awareness and change; most poignantly, through her deeply personal meditation on memory, deterioration, and death, its ability to overcome the constraints of time by memorializing that which is most transient. Indeed, Johnson formulates her film as a memoir, and yet we only ever see her once, briefly. In truth, there’s no need to see her at all: her footage becomes a gestalt, its content and precise formal choices enough to evince the character of the person who produced it, its collage emerging as a veritable archive of her memory and emanation of her very being. At all times asserting the presence of the camera and the influence of the person behind it, Cameraperson posits the apparatus not as a mechanical observer, but as a fundamentally human project, activated only in its interaction with the body and mind, and endowed with all the moral responsibility and fragility that inevitably entails.