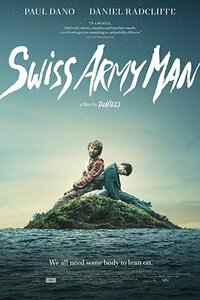 IDEA:   A man about to hang himself on a deserted island is rescued by a flatulent corpse, whose sundry abilities allow the two to survive.

BLURB:  A sophomoric jape hijacked by dramatists with a sincere interest in exploring human behavior, social conventions, and the warped face of millennial angst, Swiss Army Man is a disarming blend of the vulgar and the humane that insists such qualities are inextricably enmeshed. Kwan and Scheinert present what is a fairly straightforward allegory of the return of the repressed – a timid, despondent man is visited by the moribund embodiment of man’s primal, suppressed urges, and finds his will to live again by reanimating in him what has died – and deliver it with berserk yet unwaveringly earnest commitment via their outlandish buddy-movie conceit. Defying belief, what sounds puerile and thin on paper is robustly moving on screen, as Paul Dano and Daniel Radcliffe work in perfect sync with the Daniels’ vision, throwing themselves (literally) headlong into this fantasia of lurid corporeal activity while fleshing out an intimate, borderline romantic pas des deux. Central to being alive, the film asserts, is to be a body in space, and to have a mind that can operate that body in all its weird, improbable glory. Kwan and Scheinert offer up bodies, and a tactilely handcrafted world around them, in contradistinction to a culture growing increasingly dematerialized and disconnected, placing ecstatic emphasis on bodily functions and the simple affinities they afford. One wishes their film was even stranger and more transgressive than it is – for all of its colorful inventiveness, it still succumbs to aesthetic and narrative triteness, with too many montages and what amounts to a depressingly familiar ennobling of male solipsism. Still, their main character isn’t let off the hook here, and if he looks kind of psychotic by the denouement, the film mordantly argues that we would too if we all acted our real selves.