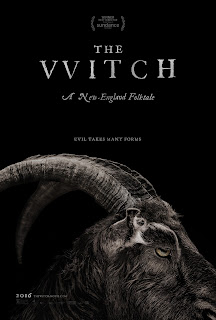 IDEA:  In 1630s New England, a Puritan family is tormented by strange phenomena after being exiled from their village to a farmstead just outside the woods.

BLURB:  The Witch is not, strictly speaking, nerve-jangling supernatural horror. Nor is it a period drama about Puritans where the occult stands as a purely metaphorical representation of ideological evil. Instead, it craftily synthesizes the two approaches to tell a story where supernatural evil arises as the logical, inevitable result of dogmatic ideology. In Eggers’ film, under perpetually sepulchral skies in a scarily nascent America, it is the religious zealotry, persecution, and unbridled paranoia of the Puritans that literally breed the witches whose existence they only suspected, fulfilling their fear by inadvertently manifesting it. The Witch is brutally effective in this depiction of self-perpetuating and self-consuming fear, running real witchcraft parallel to the inner turmoil and eventual implosion of its Puritan family unit to underscore just how insidious the latter is, its tyrannical repressiveness a horror equal to or more than that of the spirits lurking in the woods. Less successful is Eggers’ handling of tone and rhythm: he makes an audacious narrative gamble early on that pays off conceptually, but it also somewhat hobbles the film’s suspense, and he has difficulty keeping the rope tightly wound to generate the kind of steady, inexorably building dread the film calls for. Thankfully he makes up for the slack with his ghostly visuals, and certainly in the smart nuances that texture this parable of religious hysteria, one that slyly posits the life of sin so much hostility had gone into averting as both a tragic outcome and ecstatic liberation from a paralyzing culture.