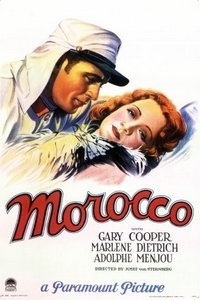 IDEA:  A disenchanted cabaret performer becomes entangled in the affections of a French playboy and a lusty legionnaire.

BLURB:  Quixotic and Hollywood-seductive yet tempered by world-weariness, Morocco is one of Josef von Sternberg’s typical products in which romantic notions of all kinds fight against impulses of disillusionment and lament. As in other cases, story is superfluous and often trite, subordinated to glistening images of scenery and faces and the febrile emotions they hold. Sternberg exploits this quality first by making the most of his exotic North African locales, then by reverting, as he must, to the divinely enigmatic visage of Marlene Dietrich. Despite other thin characterizations, Sternberg can never be accused of giving Dietrich paltry roles. Even though her Amy Jolly follows a disappointingly gender-prescribed arc, from defiantly independent and no-nonsense chanteuse to grieving and desperately heartsick wife, Sternberg imbues her with varied and often contradictory facets. She is alternately coquettish, subversive, doe-eyed and intractable; reticent and apathetic yet passionate and assertive; blithely resistant to patriarchal rituals and yet, finally, recuperated by heterosexual love, if only on her own willful terms. The variegated nature of her character offsets some of the movie’s dated mechanics, and the final shot, breathtakingly conjured, reveals that Sternberg knows the price of his romance.