The Loneliness of the Long Distance Runner

THE LONELINESS OF THE LONG DISTANCE RUNNER   ***1/2 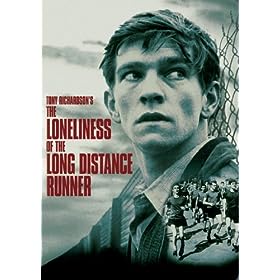 IDEA:  Colin Smith, arrested for a petty theft, is sent to a reform school. Once there, the institution's governor recognizes his talent for running and wishes to use it to prove the school can successfully rehabilitate its charges. But will Colin, chronically resistant to authority, comply?

BLURB:  The Loneliness of the Long Distance Runner pulses with the energy of the French New Wave and beats with the aching heart of neorealism, finding the perfect midpoint between its restless, whirling camera movements and the inescapable grit of its backdrops to reflect on an immortal human condition. Tom Courtenay’s young, agitated working class Brit is our anchor – his is a rebel both inspirational and doomed, operating with a perpetual arrogance that would seem foul if it weren't also a necessary tool in maintaining his identity. But although his resentment towards an unjust social order is earned, it is not fruitful. His unwillingness to compromise is admirable, but it only alienates him more. Through Courtenay’s astonishing performance, the characterization of a man running into his own estrangement becomes a sobering indictment: not just of the inequities of society, but of the limits of the individual who ultimately cannot prosper outside the system that shames him.