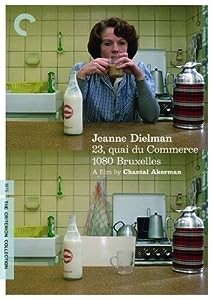 IDEA:  A woman goes about her everyday schedule: making the bed, washing dishes, preparing dinner for her son, brushing her hair, and occasionally turning a trick.

BLURB:  For its hypnotic, sedative cadences; for its fastidious depiction of spatial dynamics; for its temporal experimentation, harnessing shape, light, color, sound and composition to convey reservoirs of subdued pain; for its rigorous documentation of time, visibly passing; for its social critique of bourgeois complacency, female repression, and stifled sexuality; but most of all, for the ways in which it communicates, agonizingly, the comforts and indignities of routine, Jeanne Dielman is a masterpiece. Stretching out across 200 minutes but focusing intently on only one woman and a couple of rooms, it manages to turn simple domesticity into an occasion for existential dread. Long, structured takes let us read the frames from top to bottom and left to right, soaking up their patterns with the same studiousness by which Jeanne runs her life. This film “reality” is so familiar and so mundane it moves past notions of real or cinematic and merely becomes transcendent. But then it slips into disorder. After having paid careful attention to each detail, we immediately realize when the symmetry has been thrown out of whack. Cracks begin to show. Each missed beat puts us on edge. Anxiety in the viewer grows in tandem with the character. Akerman unflinchingly shows us what few, if any, even dare: not just the crisis of women locked into programmed roles, but the subtle malevolence of the ordinary.