The Life and Death of Colonel Blimp

THE LIFE AND DEATH OF COLONEL BLIMP   *** 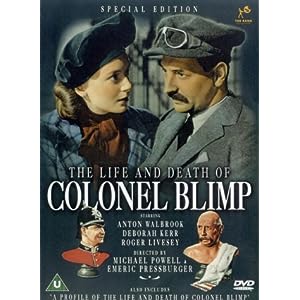 IDEA:  The life and times of General Clive Candy (inspired by, and partly modeled off of, the famous British "Colonel Blimp" political cartoon).

BLURB:  Enlivened by a trio of fabulously elastic performances and by a script that shrewdly mixes satire and sentiment, this sometimes slack war epic works thanks to its appealingly rounded characters. Chronicling the life of a British soldier from the Boer war through to WWII, from impetuous youthful lad to stodgy and obdurate codger, the film rather ingeniously presents itself in a flashback structure, introducing us first to our rotund, hoary protagonist in 1942 and then traveling backwards to the turn of the century to show how and why he’s turned out the way he has. Along his colorful journey he strikes up a complicated, wonderfully rendered relationship with a kindly German officer and pursues the elusive love of three strikingly similar-looking women (all played by Deborah Kerr, luminous). Wit stands out in spades in this story, as do the always spiriting values of personal honor, duty, fraternity, and pride, which as time rolls on find themselves besmirched by more contemporary, less “gentlemanly” conduct. A portrait of deep-seated British patriotism that also isn’t afraid to poke fun at its country’s own stiff upper-lip conservativeness, The Life and Death of Colonel Blimp is finally most impressive for the very fact it dared to do and say what it did when the outcome of a war, and of a country, still hung perilously in the balance.