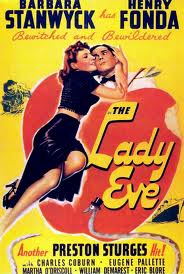 IDEA:  A wealthy young heir and snake enthusiast is wooed by a professional con artist aboard a cruise liner.

BLURB:  The Lady Eve finds itself constantly balanced on the lines between modes of comedic approach: it’s at once slapstick and dialogue-centered, friskily screwball and serious-minded, romantically idealized and attuned to the confusing, messy, often ugly realities of love and desire. Rather than feeling cockeyed, though, Sturges’s script strives on these occasionally competing notions, mining wry truths out of some seriously far-fetched situations. Henry Fonda’s naïve rich boy may be a bit of a shallow sketch compared to Barbara Stanwyck’s sultry, beguiling, self-doubting con-woman, but then the movie is named after her, and it is with her character where the narrative’s most intriguing thematic suggestions surface – taking something of a twist on the Bible’s Adam and Eve, it’s Eve her very self who represents the self-aware sin of man, and Adam who is caught in her trenchant love games. Yet Adam never loses his innocence here, instead blissfully willing to stay in the dark for the guarantee of elopement. Temptation may be a curse in The Lady Eve, but it’s rather trumped by the optimistic promise that love does, in the end, conquer all.