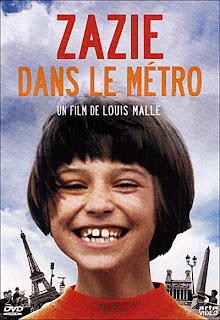 IDEA:  Zazie, a young and precocious girl under the care of her uncle, is visiting Paris for the first time. When she gets there, the city turns into a surreal jungle gym of misadventures.

BLURB:  If the French New Wave was all about obliterating boundaries, giddily breaking rules, and redefining the elements that constitute a film, then Zazie dans le Métro is perhaps the defining French New Wave movie. Ironically so, then, as its hyperactive hall-of-mirrors absurdity primarily serves to mock the experimental craziness of the movement rather than follow it. Still, Malle’s film indefatigably commits to all the outré editing and camera tricks the New Wave was so fond of – and does it ever commit: not a second of Zazie’s candy-colored romp through Paris isn’t completely bonkers, peppered by a fire-juggling polar bear here, or by a cross-dressing uncle there. Scenes jump erratically, cuts violate continuity or coherency all together, and chase scenes unravel in fast motion, as if the Looney Tunes gathered up with Benny Hill and the Monty Python crew to take buckets of LSD. Though only around 95 minutes, this can all be exhausting, irritating even. But lunacy like this, full-fledged, unabashed, audacious nonsense of this flabbergasting magnitude, is not easy to come by. Zazie dans le Métro is many things, and at the top of the list is unique.