The Children Are Watching Us 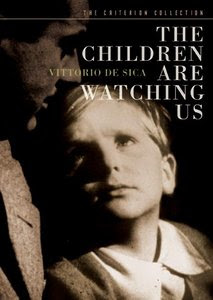 IDEA:   A young boy becomes the casualty of his parents' disloyalty, as well as the general indifference of the world around him.

BLURB:   The children are watching us, and they’re aware of much more than we might think. In Vittorio De Sica’s heart-tugging drama, the child in question is five-year-old Pricò, whose middle-class parents, in the midst of a breakup, shuttle the boy back and forth between each other and their negligent relatives. In the process he begins to recognize more and more the nature of his, and his parents’, predicament, and soon becomes the all-too involuntary victim of the inadequate and often selfish adults he’s put under the care of. If this sounds overly sentimental or glum, it’s not; while admittedly pulling at the heartstrings, De Sica’s direction is as gracious and formally refined as ever, and little Luciano De Ambrosis is note-perfect, his sensitive eyes alone conveying all the growing pains the script need not explicate. While his character may have to come to terms with a world beyond his parents far earlier than any child should, the feeling is still resoundingly, achingly familiar.